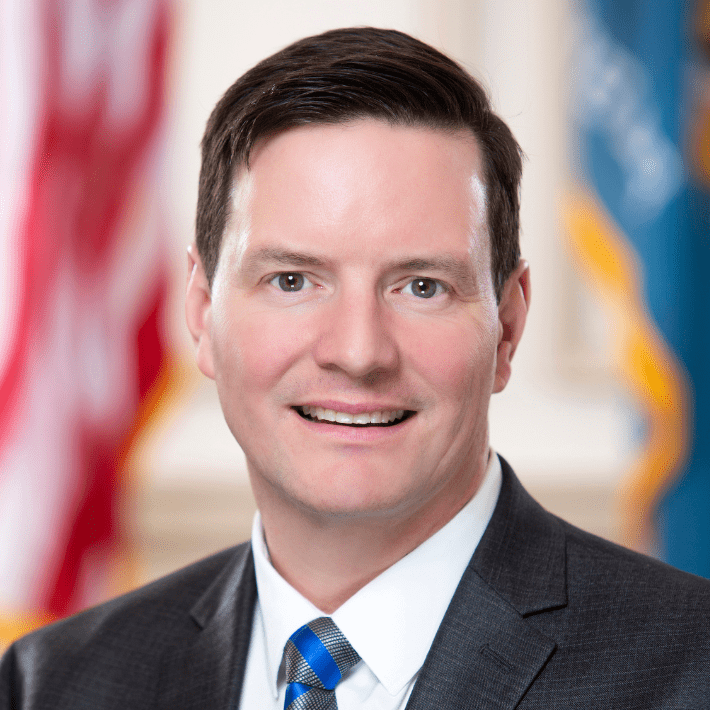 Sen. William Charles “Trey” Paradee III represents the 17th Senate District, which includes most of Dover and the towns of Camden and Wyoming.

Paradee was first elected to represent the 29th District in the Delaware House of Representatives in 2012, a position he held for three terms. He was elected to the Delaware Senate in 2018.

Born and raised in Dover, Sen. Paradee’s ancestors settled in Kent County in the mid-1600s.  He earned a bachelor’s degree from the University of Delaware in 1991. Following graduation, he worked for his father’s company Paradee Gas Co. While supporting his young family, Sen. Paradee attended evening classes to earn a master’s degree in business administration from UD in 1998.

When Paradee Gas Co. was sold in 2000, Paradee joined Merrill Lynch as a financial advisor. He opened an Edward Jones Investments office in downtown Dover in 2003 before founding Paradee Financial LLC in 2011. He continues to operate the company, which provides financial advice to small businesses and helps families save for college and retirement.

Sen. Paradee also has served on numerous boards and committees for local organizations and charities, including the Boy Scouts of America, Delaware Technical Community College Educational Foundation, the Downtown Dover Partnership, and the Inner-City Cultural League. Sen. Paradee also volunteered as a youth lacrosse coach for the Camden Mid-State Youth Lacrosse Club from 2009 to 2012.

He currently serves as co-chair of the budget-writing Joint Finance Committee and vice chair of the Senate Banking, Business, Insurance & Technology Committee. He also serves a member of the Senate Agriculture, Environment, Energy & Transportation, and Veterans Affairs committees.

Sen. Paradee lives in Dover and is the proud father of Cassie and Charlie. He is often seen in the company of his Labrador Retrievers Belle, Teddy Bear and Lulu.

This Act appropriates $378,613,700 to provide one-time funded projects through the Office of Management and Budget. […]

This bill creates a special license plate for the Boy Scouts of America. […]

DOVER – The Delaware Senate on Thursday passed a record-setting $69.4 million grant package that will help bolster fire companies, ambulance services, senior centers, veterans’ organizations, and other community organizations that provide invaluable services to the people of Delaware. The […]

DOVER – The Delaware Senate on Tuesday passed legislation to raise the legal purchasing age for all firearms to 21. Federal law requires a buyer to be at least 21 years old for all handgun purchases, but only 18 years […]

DOVER – The Delaware Senate on Wednesday passed legislation to allow same-day voter registration in Delaware, which will permit eligible state residents to register to vote on the same day they cast their ballots. Sponsored by Rep. Sherry Dorsey Walker […]

DOVER – The Senate on Tuesday passed a $5.1 billion operating budget for Fiscal Year 2023 that upholds the General Assembly’s commitment to state workers and retirees, while making new investments in Delaware’s public schools and critical programs that benefit […]