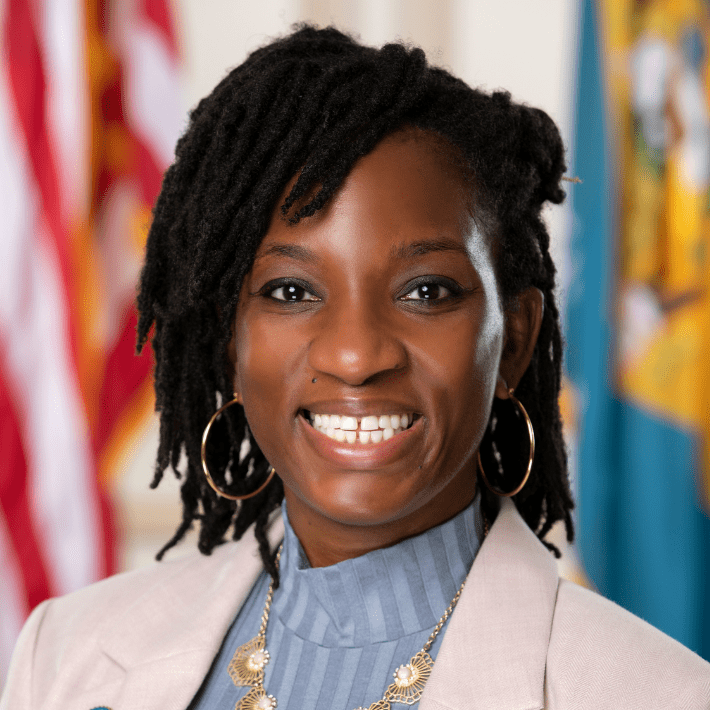 Sen. Marie Pinkney represents the 13th District, which stretches from the Christiana River south to Red Lion Road and encompasses dozens of neighborhoods along Route 13.

After graduate school, she began working at a treatment center for adolescents with mental health and substance abuse issues. She also became the foster mother to a teen mother and her young son for many years.

Sen. Pinkney currently works as a social worker/case manager at ChristinaCare. She has dedicated her career to advocating alongside families seeking quality healthcare, access to resources, educational support, and government policies that support them.

Sen. Pinkney became the first African American LGBTQ+ person ever elected to the Delaware Senate in 2020. She is dedicated to fighting the negative impacts of racial and socioeconomic inequalities, as well as the stigmas and hurdles faced by formerly justice-involved individuals and those with limited educational backgrounds.

She lives in Bear with her German Shepherd Gandhi and her cat Penelope aka Penny Proud.

When a youth who is experiencing foster care and living in an out-of-home placement has a need for inpatient psychiatric treatment, there can be a delay in gaining voluntary admission to a facility due to the Division of Family Services […]

This Act caps the amount that an individual, group, or State employee plan may charge for diabetes equipment and supplies, other than insulin, at $35 per month. This cap does not apply to accident-only, specified disease, hospital indemnity, Medicare supplement, […]

This bill broadens the scope of mental health practitioners who are authorized by statute to conduct examinations with inmates for purposes of advising the Board of Pardons on matters material to the Board’s scope of review. This will enable licensed […]

This Act modernizes Delaware’s probation system by doing the following: (1) Ending incarceration of probationers for technical violations. (2) Enabling the customization of conditions of probation to meet individual needs. (3) Requiring the collection and publication of data on probation. […]

By Rep. Melissa Minor-Brown and Sen. Marie Pinkney | In 2020, Delaware like many other states witnessed firsthand how the COVID-19 pandemic exacerbated health inequities in vulnerable communities, especially among minority groups and seniors. We are very much aware of […]

Together, we can end racial disparities in maternal health

By Sen. Marie Pinkney | While the United States was founded on the principle of all men being created equal, we know this nation has never truly treated all of its citizens equally. Far too often, women in America today […]

DOVER – The State Senate on Tuesday sent five bills to Governor John Carney that will help some of Delaware’s most vulnerable residents earn a fair wage, obtain a college degree, keep a roof over their heads and receive the […]

The Delaware Senate on Wednesday sent four bills that will protect the health and safety of infants, children, and birthing parents to Governor John Carney for his signature. […]