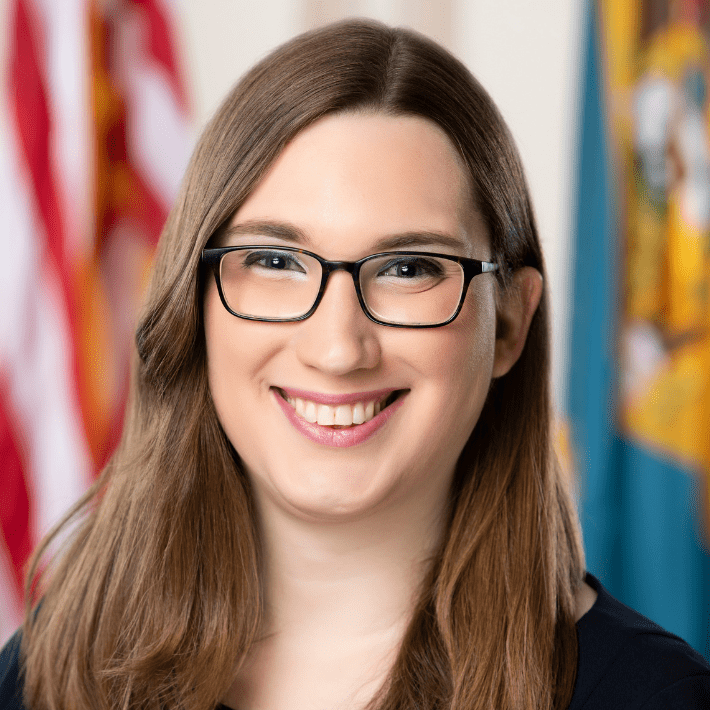 Raised in Wilmington, McBride has been involved in community advocacy for most of her life, including working for former Governor Jack Markell, the late Attorney General Beau Biden, and as a White House intern during the Obama Administration.

She later served as a spokesperson for the Human Rights Campaign, the nation’s largest LGBTQ equal rights organization. McBride teaches public policy at the University ofDelaware and is the author of the 2018 memoir, “Tomorrow Will Be Different.”

Prior to being elected to the State Senate, McBride led the successful effort to pass a landmark non-discrimination law in Delaware, worked with state leaders to expand healthcare covered by Medicaid, and championed legislation protecting vulnerable youth from child abuse.

For her work and advocacy, former Gov. Markell awarded McBride the Order of the First State, making her one of the youngest Delawareans granted the state’s highest civilian honor. When McBride was elected to the state Senate in 2020, she became the first openly transgender state senator in American history.

She currently serves as chair of the Senate Health & Social Services Committee, and a member of the Senate Banking, Business, Insurance & Technology, Education, Executive and Judiciary committees.

Sarah married her late husband Andrew Cray in 2014 and is the proud aunt of Juliette, Theo, Bennett, Sydney, Teagan, Ben and Addison.

Sarah married her late husband Andrew Cray in 2014 and is the proud aunt of Juliette, Theo, Bennett, Sydney, Ben and Addison

This Act updates the mandatory reporting requirements for Delaware physicians with anxiety, depression, and other mental health challenges. These changes are necessary to ensure that physicians are able to seek treatment without undue stigma or fear of loss of medical […]

SB 256 updates the crime of official misconduct to ensure appropriate accountability of public servants who abuse their positions of power and public trust. […]

By Sen. Kyle Evans Gay, Sen. Sarah McBride and Lt. Governor Bethany Hall-Long | As we continue our transition into a post-pandemic economy, it has perhaps never been clearer that the strength of our state depends on the health and […]

WHAT: U.S. Department of Health and Human Services’ Assistant Secretary for Health Admiral Rachel Levine will visit Delaware on Friday, Aug. 19 to join state Sen. Sarah McBride in highlighting how medical providers and local businesses in the First State […]

The Delaware Senate on Wednesday sent four bills that will protect the health and safety of infants, children, and birthing parents to Governor John Carney for his signature. […]

DOVER – The Delaware Senate on Tuesday passed legislation to raise the legal purchasing age for all firearms to 21. Federal law requires a buyer to be at least 21 years old for all handgun purchases, but only 18 years […]